Typical Greek town. One of the oldest in Greece and its name mean Holy Rock. About 30 kilometres from Makriyialos, its an easy drive along the southern coastal road. Many business opportunities available here as well as property.

Ierapetra has the most people in Lassithi with 15.400 registered in 2001 and is the fourth town in Crete. As it is the most southern town in Europe, it is called the 'bride of the Libyan Sea' due to its position on the coast.

Ierapetra has been on the map since Minoan times and in the Roman era, there was a town in the same place called Hierapytna. Later Ierapytna was the strongest town in eastern Crete. In the 3rd century Hierpytna was famous for piracy and this really finished in 67 BC when it was levelled by the romans.

It was rebuilt but soon outmoded for Gortys. Now we can still see the remains of the roman harbour. In 824 AD it was once again levelled by Arab invadors, but again rebuilt for piracy again! From the 13th to 17th venetian ear, it became known as Ierapetra and grew again. It had a fortress built in 1626 in Kales to look after the ships and was soon famous again.

Finally, Napoleon visited Ierapetra and stayed there, the house can still be seen and in  the Turksh invasion, mosques were built in the main town. 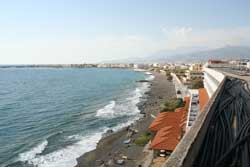 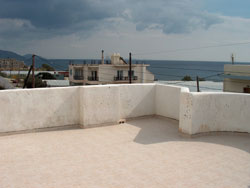 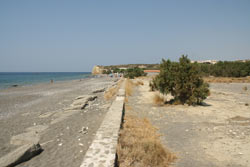